Home » Spiritual » Meat and the Environment

Meat and the Environment 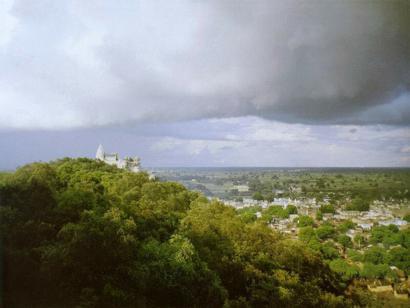 "Today, millions of people are consuming countless hamburgers, steaks, and roasts, oblivious to the impact their dietary habits are having on the biosphere and the very survivability of life on earth. Every pound of grain-fed flesh is secured at the expense of a burned forest, an eroded rangeland, a barren field, a dried-up river or stream, and the release of millions of tons of carbon dioxide, nitrous oxide, and methane into the skies."  from "Beyond Beef" by Jeremy Rifkin.
Killing animals for food, fur, leather,
and cosmetics is one of the most environmentally destructive practices taking place on the earth today.
Consider these facts:
1. Half of the annual destruction of tropical rain forests is caused by clearing land for beef cattle ranches. Each pound of hamburger made from Central
American or South American beef costs about 55 square feet of rain forest vegetation. Each person who becomes a vegetarian saves one acre of trees per year.
2. Another devastating result of deforestation is the loss of plant and animal species. Each year 1,000 species are eliminated due to destruction of tropical rainforests for cattle grazing, and the rate is growing yearly.
3. About half the world's grain is consumed by animals that are later slaughtered for meat. This is a very inefficient process. It takes 16 pounds of grain and soybeans to produce 1 pound of feedlot beef.
4. If people were to subsist on grains and other vegetarian foods alone, this would put far less strain on the earth's agricultural lands. About 20 vegetarians can be fed from the land it takes to feed 1 meat-eater.
5. If all the soybeans and grain fed yearly to US livestock were set aside for human consumption, it would feed 1.3 billion people.
6. Overgrazing and the intensive production of feed grains for cattle and other meat animals results in high levels of soil erosion. One pound of beef from cattle raised from feedlots represents the loss of 35 pounds of topsoil. In Australia, cattle grazing and feed-crop production has contributed greatly to desertification.
7. Burning of oil in the production of feed grain results in air pollution, including carbon dioxide, the main cause of global warming. Another major source of air pollution is the burning of tropical forests to clear land for cattle grazing. The meat industry is also responsible for other greenhouse gases, which is produced directly by the digestive process of cows.
8. About 50% of the water pollution in the United States is linked to livestock. Pesticides and fertilizers used in helping grow feed grains run off into lakes and rivers, and pollute ground water. Organic contaminants from huge concentrations of animal excrement and urine at feedlots and stockyards also pollute water. This waste is anywhere from ten to hundreds of times more concentrated than raw sewage.
9. All around the world, the beef industry is wasting the diminishing supplies of fresh water. For example, the livestock industry in the United States takes about 50% of the water consumed each year. Feeding the average meat-eater requires about 4,200 gallons of water per day, versus 1,200 gallons per day for a person following a lacto-vegetarian diet. And,while it takes only 25 gallons of water to produce a pound of wheat, it takes 2,500 gallons of water to produce a pound of meat.
In conclusion, reducing or eliminating meat consumption would have substantial positive effects on the environment. Fewer trees would be cut, less soil eroded, and desertification would be substantially slowed. A major source of air and water pollution would be removed, and scarce fresh water would be conserved.
"To go beyond beef," says Jeremy Rifkin, "is to transform our very thinking about appropriate behaviour towards nature. We come to appreciate the source of our sustenance, the divinely inspired creation that deserves nurture and requires stewardship. Nature is no longer viewed as an enemy to be subdued and tamed".

« The New Carnivores
Diet for Transcendence: An Interview with Steven J. Rosen »