Diet for Transcendence: An Interview with Steven J. Rosen 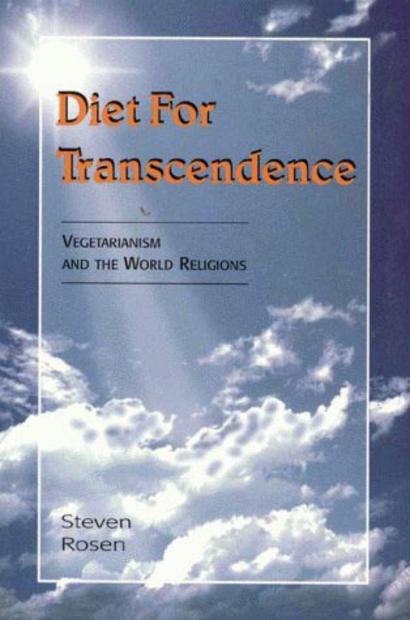 Integral Yoga Magazine: How did you start writing about vegetarianism, what inspired you?

Steve Rosen: When I was a teenager, I was looking for dharma, or “essential truth,” which is found at the core of all religious traditions. This led me to perceive certain unifying threads in the world religions, like the soul, or how the inner living being is different from the material body; it’s related idea of reincarnation; and then ahimsa, nonviolence, leading to vegetarianism. If you look deeply enough, you’ll find these connecting threads in all religious traditions, at least in the mystical branches of these traditions.

IYM: You mentioned the mystical branches of the various religions and the principle of nonviolence. Would you elaborate?

SR: Every religion has an aspect of ahimsa that’s more pronounced in its mystical traditions. And, there is quite a history behind the abandonment of animal rights and the deletion of scriptural texts dealing with the equitable treatment of animals. I tend to look at religion like a person. A person has the external body and the soul within. All religions have those two components. The external body is comprised of the rituals and customs. The soul is the more internal teaching you find among the mystics. The idea of kindness and the Golden Rule is found almost verbatim in each faith. The idea of ahimsa and not causing unnecessary harm is a thread and if you study religion superficially you don’t find these unifying threads.

IYM: Would you give us an overview of these unifying threads?

SR: Ancient India’s scriptural legacy, the Vedic literature, was originally emphatic in its support of monotheism and animal rights, even if there was also a tradition of animal sacrifice mentioned in those same texts. God was seen as Brahman, the Supreme Spirit. He was the ultimate Father much as He is in the Judeo-Christian tradition, and all living entities were seen as His children. So deeply ingrained was the tradition of ahimsa that saints, sages and prophets of the ancient Vedic tradition were particularly strong advocates of animal rights. There are over 700,000,000 Hindu vegetarians today—this includes eighty-three percent of India’s current population. We also find in scriptures, like the Mahabharata, the key phrase “ahimsa paro dharmo.” This means, “Ahimsa is the highest duty. One’s highest dharma is to be nonviolent. Therefore, if you are going to really try to link with God, which is the goal of Yoga, you have to give up the use of animal foods.

In the Judeo-Christian tradition you have the commandment: “Thou shalt not kill.” For decades the difference between the terms “kill” and “murder” have been debated. Several studies discuss the significance of this commandment from a vegetarian point of view. The most noted work would be Aaron Frankel’s “Thou Shalt Not Kill”—The Torah of Vegetarianism, published in the 1896. Since then, only a handful of outspoken vegetarian advocates have explained the commandment in terms of their dietary preference. Literalists might tightly cling to the primary definitions, saying that murder refers only to humans, and that this is where the argument should end. But, as if anticipating this response, the Bible tells us, “He that killeth an ox is as if he slew a man.” (Isaiah 66.3). For me, the bottom line of the kill vs. murder argument is: Don’t do any unnecessary killing.

IYM: What about in Islam?

SR: The Islamic mystics, or Sufis, are well known for being vegetarian. In the mid-80s I interviewed, Bawa Muhaiyaddeen and he was adamant that a good Muslim would be vegetarian. Islamic tradition holds that in Mecca, the birthplace of Mohammed, no creature can be slaughtered and that perfect harmony exist between all living things. Mohammad was very compassionate and it is told how a dog fell asleep on his cloak and the Prophet would not move as he did not want to disturb the dog’s sleep. We see this reflected in the names of God in Islam: the two most frequently used names are al-Rahim (the All Compassionate) and al-Raham (the All-merciful). God is not called the “semi-compassionate.” God is not compassionate only to humans, but All Compassionate. Think about the implications.

IYM: Thich Naht Hahn is vegetarian, but not all the Buddhists teachers are.

SR: Original Indian Buddhism was fully given to the principle of ahimsa, harmlessness, which to this day is considered the first of Buddhism’s nine major precepts. But as Buddhism traveled to other lands, such as China, Japan, Burma, Cambodia, Tibet, Thailand, and Vietnam, among other places, the essential teaching of animal rights and its concomitant principle of ahimsa had become severely compromised. Of the two chief branches known today, Mahayana and the older Theravada, both are tolerant of meat-eating and have lost virtually all sight of animal rights. This is less so in Mahayana Buddhism, where meat consumption is still somewhat frowned upon. Monastic orders, of course, are stricter in regard to abstinence of flesh foods.

Contemporary Buddhist movements, such as the Buddhists Concerned for Animal Rights, are interested in reestablishing the roots of ahimsa sensibility. And certain Buddhist denominations, such as the Cao Dai sect, which originated in South Vietnam, now boasts some two million followers, all of whom are vegetarian. In Zen Buddhist monasteries, no meat or fish is allowed—the monks try to observe the old laws and observe strict rules of discipline.

IYM: If so many religions recommend vegetarian diet, why don’t more people follow their religion’s edicts? And, sometimes were hear people, even Yoga practitioners, saying: “Well, I used to be a vegetarian but it’s all about intention and my intentions are pure so I can eat anything.”

SR: First of all, most people take their religions out of context. They pull a verse that supports their desires, but if they look at the tradition deeply, they will see an All Compassionate God and will realize that every living thing deserves our compassion. We can make all kinds of arguments. In the Judeo-Christian tradition the common conception is an Aristotelian one. Aristotle’s idea was that everything could be broken up into separate compartments—science, mathematics, and so on. The Aristotelian-Cartesian world view is a very mechanistic view of reality. In such a view, animals can be easily treated as machines that are here for our pleasure. St. Thomas Aquinas also believed in this. So, you have that point of view that makes humans the focus of main importance. But, then there is also the Platonic-Franciscan point of view which is a more creation-centered spirituality. This world view says that humans are not the center of the universe; we are part of the universe and animals have as much a right to life as we do.

If someone, after many years of spiritual practice, goes back to eating meat they can rationalize this but it’s not based on any religious sensibility or logic. If you really understand ahimsa there is no going beyond that. There are active religious groups such as the Jewish Vegetarian Society and Christians Concerned for Animals that link the practice of their faith with principles of nonviolence.

IYM: Of course there is the argument that in some areas of the world, it’s not possible to eat a vegetarian diet.

SR: If someone is living where there are no vegetarian alternatives, then yes. But, largely, we are not in that situation. Even in the Vedic literature, the warriors who were doing battle out in the jungles were permitted to eat meat. But, they had to hunt and kill it themselves if they wanted to eat meat. They couldn’t go to the supermarket to get it. If people had to do the killing, there would be less meat-eaters because when you kill the animal you can’t pretend you are not eating a dead animal!

IYM: Jain monks wear masks that cover their noses and mouths to not harm small insects and organisms and they sweep in front of where they are walking so as to not step on any living thing. Is that extreme?

SR: Those practices are for Jain monks, not for those who are living and working in the world. All of living involves some killing. One type of living entity is food for another. The best you can do is to minimize the killing. A vegetarian does the least amount of harm to sentient beings. Jainism has over four million followers, all of whom are strict vegetarians. In India, Jains are famous for their animal hospitals and they have elevated animal rights to a religious principle.

Steven J. Rosen (Satyaraja Dasa) is an initiated disciple of His Divine Grace A. C. Bhaktivedanta Swami Prabhupada. He is also founding editor of the Journal of Vaishnava Studies and associate editor for Back to Godhead. He has published twenty-nine books in numerous languages, including the recent Essential Hinduism (Rowman & Littlefield, 2008); the Yoga of Kirtan: Conversations on the Sacred Art of Chanting (FOLK Books, 2008); and Krishna’s Other Song: A New Look at the Uddhava Gita (Praeger-Greenwood, 2010). He has sinned with dark chocolate