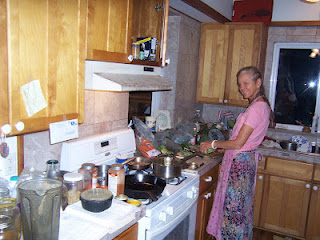 "Hare Krishna Food"
"Hare Krishnas have the good food. I learned that right away."
Mathura is helping shovel a load of mulch out of my truck. It's a beautiful Spring day, the new Pear trees are looking happy, the garden is coming in and a neighbor has dropped by to chat.
"My sister used to go to the Dallas Temple on Sundays with her friend." Mathura continued," She told me about it. I went to the Rainbow Gathering in Missouri, that's where I first met the Krishna People."
"Missouri Rainbow Gathering? What year was that?"
"Uh, let's see, I was 18, so it was uh, '94 or was it '96? Anyway, they were nice people and seemed happy to feed me."
"They make you feel like you're doing them a favor by eating there."
"Yeah, there was this monk from Russia, he seemed really happy to see me come by and eat every day. He was glad to feed me."
We had been talking about this weekend's plan. A few of us are meeting at the Shakori Hills music festival. http://shakorihillsgrassroots.org/
We'll be cooking 'Hare Krishna Food' for the staff and performers, about 400 people. We're doing this as volunteers, simply because we enjoy it, as Mathura had mentioned. Hare Krishna people enjoy feeding everyone.
One of the volunteers for this weekend's adventure, Jagad Guru, cooks and delivers Hare Krishna Food to 4 or 500 Chapel Hill University students every week. This has been a tradition for over 20 years at UNC.
Recently, Jagad Guru has begun a similar program at Duke University where 3-400 students come for the meal.
Why do we do this for no pay? What's the motivation?
I started asking this of myself. It may be due to social training. It's something that all Hare Krishnas do. We imitate behavior of those we are surrounded by and it becomes part of our nature.
My wife Maharha never goes to town empty handed. She keeps a stock of homemade cookies, small cakes or other snacks to give to anyone she contacts while on her excursions. 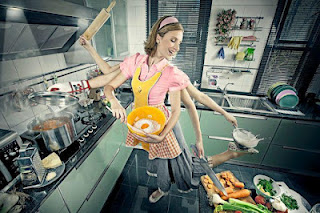 Seeing her example, our 4 year old son Narayan, would offer guests a Vitamin C or a raw potato. I remember one guest very graciously accepted the raw potato. After praising both Narayan and the home grown potato, ate it on the spot, raw.
Where did this behavior originate if we're learning this from others?
When Srila Prabhupad came to New York City in 1965, he brought this concept from India. Visitors would receive 'Prasad' from his hands. When guests began to increase, he would cook and feed everyone although he had very little money.
12 years later, the International Society for Krishna Consciousness had grown to over 100 temples. Prabhupada sent a notice that at every temple we should be ready to give a full meal to any visitor at any time of the day. He advised to not worry about the expense or any other consideration. I remember hearing the letter read out loud for the morning announcements in 1977. The program was instituted. In a recent visit to the temple in Berkeley California, I saw happy to see that it has continued, this time I was on the receiving end.
When I visit homes of friends from India I get similar treatment. It is their culture, their training, to feel genuine pleasure when there is an opportunity to feed a guest.
Feeding strangers can be an adventure, you never know what the outcome will be.
This Summer, the Rainbow Gathering will take place somewhere on the East Coast. I will at that time invite  you to join in setting up a Krishna Kitchen to feed hundreds of spiritual seekers camping in a national forest around July 4th.
Beyond the good will of sharing food, there is another element to Hare Krishna Food. The intentions of the cook will infect those who eat. Temple cooks are trained to prepare meals as a meditation. They are cooking for the pleasure of God. The meal will ultimately be eaten by Him as a ritual. These godly thoughts have an effect on those who partake of this food.
You are taking in more than simply calories and vitamins.
Food prepared by very pure personalities is seen as particularly valuable for this reason.
This is something you may experiment with on your own, with or without elaborate rituals. No one needs to know about it for it to work. Try it for a week or two and watch for results. You may decide to make this a habit.
« Must we kill in order to live
Origin of Onion & Garlic »