Posted in Pasta and Noodles 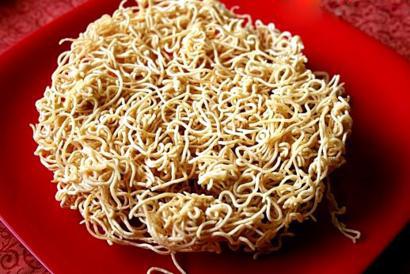 Sev rivals peanuts as India’s most popular munching snack. Anywhere people gather, a sev vendor is sure to appear with an assortment of freshly made fried noodles. Some noodles are spicy and spaghetti-thick, while others are very fine and unseasoned.
Sev noodles are shaped with a sevaya machine, a unique brass utensil equipped with an assortment of interchangeable disks. A fine-holed disk is attached to the container and filled with dough, which is then pressed into hot oil where it fries into crisp crunchy noodles. This utensil has two sev disks thick and thin with additional disks for several other fried snacks. It is available at most Indian grocery stores. You can use a potato ricer as a substitute.
Preparation and frying time: 25 minutes
Ingredients
• Sifted chickpea flour (Sifted before measuring) – 2 ¼ cups (230 g)
• Salt – ½ tablespoon (7 ml)
• Cayenne pepper – ½ teaspoon (2 ml)
• Turmeric – ½ teaspoon (2 ml)
• Vegetable oil – 1 tablespoon (15 ml)
• Lemon juice – ½ tablespoon (7 ml)
• Water – ¾ cup (180 ml)
• Ghee or vegetable oil for deep-frying
Preparation
1. Blend the chickpea flour, salt, cayenne and turmeric in a mixing bowl. Add the oil lemon juice to the water and pour into the flour. Mix into a thick paste, adding additional flour as necessary so that the mixture is not sticky. It should resemble the texture of mashed potatoes. Divide into three portions, then fill the sevaya machine with one portion, or place that amount in a potato ricer.
2. Heat ghee or oil to a depth of 2 ½ inches (6.5 cm) in a karai or deep-frying pan over moderate heat until it reaches 345 F (175 C). Holding the utensil over the hot oil, force the mixture through the holes by turning the handle. As the noodles fall, slowly move the machine around in a circular motion so that they do not clump together. Fry for 1 ½ minutes per side or until crisp and lightly browned. Remove with a slotted spoon and drain on paper towels.

3. Fry the remaining paste in the same way. Cool to room temperature, then break into uniform pieces. They can be kept in airtight containers for 2 weeks. To reheat, place in a 250 F (120 C) oven for 8 minutes.