Tomatoes with Paneer and Yogurt 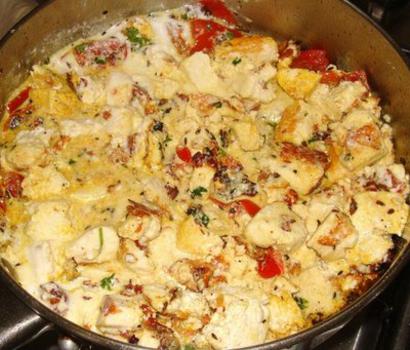 Ingredients
• Paneer made from 1 gallon of milk, coarsely chopped in bite-sized chunks
• Ghee – 3 tbsp
• Cumin seeds – 2 tsp
• Small tomatoes, each cut into eighths – 3
• Salt, as desired
• Freshly ground black pepper – 1/4 tsp
• Water – 1/2 cup
• Turmeric – 1/2 tsp
• Thick yogurt or sour cream – 1 cup
• Chopped fresh coriander leaves – 2 tbsp
Preparation
1. Heat the ghee in a heavy bottomed frying pan until very hot (becomes clear-looking). Then the paneer chunks will not stick to the pan.
2. Toss in the chunks of paneer. Stir fry until browned. Then set aside.
3. Fry the cumin seeds in 3 tablespoons of heated ghee until dark brown.
4.Stir in the tomato pieces, sprinkle on the black pepper and saute them a bit, then add water and the turmeric. Cook about 5 minutes on medium heat until the water dries up. If they get a little brown- called char char- that’s good.
5. Remove from the flame, stir in the paneer,salt, and chopped coriander leaves.
6. Pour on the yogurt. Stir gently and then garnish with the chopped coriander.
By Bhaktin Priya
« Ekadasi Noodle
Spicy Okra with Coconut »